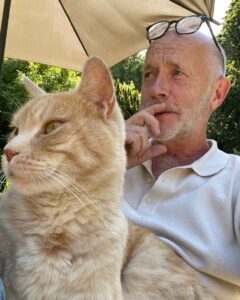 Between all books of Bert Overbeek is ‘Guernica and Zaharra’ an interesting exception. This interview is about that book and we will start with a blog quote from the writer about the book: ‘I wanted to do something with big themes like war. To understand why human beings killed their own species and why they bargain with their consciences. I wanted to investigate that. I wanted to fillet the hate. If it was hate and not just thoughtlessness or stupidity.’

This book deals with an impenetrable theme: how can unsuspecting people turn into monsters by circumstances? And also: what are our leaders doing to us with those wars? ‘I am sick and tired of political men who unleash war’ Overbeek tweeted ‘Hundreds of thousands often young people, are being driven to death because their leaders do not want to tackle a stupid conflict.’

You called ‘Guernica and Zaharra’ a confrontational book. Why?

In this book the suffering of the last century comes through. And especially the suffering we inflict on each other. Homo sapiens attacks its own kind. That is confrontational. The book is about the death of John F Kennedy, Auschwitz, the former East Germany with its cruel stasi, the war in the former Yugoslavia, Siberia at the time of Stalin, Chernobyl, the revolution of Iran, Nazi Germany and the first world war. It is about suffering that people do to people. Unfortunately that’s a rather essential side of our humanity.

I am not saying that we live from war to war. I do see people go to war from time to time, like now in Ukraine again. And then the suffering can become disproportionately great. Actually too big for human minds to process.

There are many explanations for this. But I still see it as a biological phenomenon. It is alpha male behavior. War seems mostly an alpha male issue if you look back in history. Alpha male behavior has strong biological benefits. You have the best chance of sexual reproduction and good meals, for example. It’s deep in our biology. That is why we drive expensive cars and we like to show off with our status if we have an interesting job.

War and the killing of fellow human beings seem to belong to man. We are a species that kills our own species.

Ants and chimpanzees do that too. So it’s not specifically human. And let’s not forget that the history of people is more than war. There are those who claim that wars are the fixed stations in human history. That people are all capable of it. I don’t know if I agree with that. I think there are also a lot of people who don’t want have anything to do with it.

It is always a tiny power-hungry segment of the population that wants war. They have violent leaders who stir up their environment with fear as a motivator. That happens every now and then and it sticks very much in the collective consciousness because it is such an emotional event. It is a festival of hate and murder. And after the wars we will rise statues for the liberators or war heroes. We remember the relatively short periods of war, but not the long periods we live in peace. I think that distorts our historical consciousness.

Do you see people’s homicidal and warmongering as incidents?

As a recent Dutch book said: most people are good. It is often said that homo sapiens lives from war to war, but reality shows us that very many people are kind caring and empathetic. History consists of long periods of peace and coexistence, interspersed with periods of war and oppression.

From this point of view, it’s important to see why we keep getting caught up in those wacky wars, and other destructive behaviors. What moves us? Why do we pick up guns to kill others? Who are we to think that we have the right to do that? Why is there secret information? Why don’t we work together? These kinds of questions are hidden behind the collection of ‘Guernica and Zaharra’. I think these are important questions for homo sapiens.

You often first tackle the dramatic events in you war and catastrophe collection from the perspective of the perpetrators and then of the victims. Why are you doing that?

Because it reflects well what causes misfortune. The ignorance or unconscious harshness of perpetrators has devastating effects on the lives of the victims. I especially hate that ignorance. There are of course exceptions, who enjoy the suffering of others, but I think that’s a psychopathic minority. Most people don’t feel comfortable with other people’s misery. Yet they cause it. This usually happens from an underlying motive. An ideal that is good.

People may have wrong intentions. You can’t deny that.

In my opinion the traumas that people inflict on each other very often do not arise from wrong but from good intentions. I believe it was Osho who told us that everyone preaches love but that preaching doesn’t lead to more love. On the contrary. That was well seen from this guru. Out of love people captivate, torture or kill people, because they think they are doing good to God, the fatherland, the tribe, the family or one’s own football club. The acts are from humane ideals. By first writing a poem about an event from the perspective of the perpetrator, and then from the victim’s point of view, one looks at these kinds of things from different angles.

Can you give some examples from the collection of those good ideals that lead to misdeeds?

Yes. For example, the poem “The law is a burning torch” sheds light on the situation in Shia Iran. “The law is a burning torch, whoever breaks it must be punished,” says the I-person of the first poem. He serves the regime, which tortures and kills dissenters. His motive is that this is necessary, to prevent chaos from arising. Chaos, he thinks, leads to problems for many people.

He also thinks that the world will become loving and peaceful if people follow the laws of Islam. So his goal is love and world peace. And he thinks to bring this closer by eliminating people who ignore the law. For him that is the evil that keeps the world in a bad shape. He will use all means to stop it.

The stasi in my book who reported people did this out of fear, but perhaps also because he liked the system of equality in power. We always say that those people are corrupt, but in doing so we underestimate the destructive power of the good intention or the ideal. A number of people from the GDR believed that the communist idea resulted in a more just society than the decadent West. That drove them to cowardly betrayal. Not always a corrupt psyche.

There are more examples from history in my book. Why do people kill a president? Why are they withholding facts about a nuclear disaster? Why did the Germans hide their concentration camps as far as possible? And from what did they derive the right to stage a genocide, to stigmatize a population group? From what self-image did they do that?

Necessary too. It’s our mirror. In my book I also always let a victim speak. People who lost their loved ones. In a very cruel way at times. Someone who read the book told me that there were times when the text took his breath away.

Me too. That part about the hutus and the tutsis, for example I found very intense.

It is a horrible episode in our history. It is impossible to describe what people do to each other in wars. It is not without reason that military personnel are returning with post-traumatic syndromes. The human mind can’t handle it. Not the tension, not the horror. And soldiers cannot refuse the horror. They have to go. Of course they receive training but that does not mean that you will then become numb.

As the son of a NATO officer I have learned to understand what the motivation of soldiers is. During my adolescence I had a lot of discussions with my father about war and peace. We often argued about it. But I have realized that my father wanted peace and not war. I know only a very few people in the army who like violence. But even then they fight because they are defending something important. But what they experience and see and what they have to do to themselves is very complicated for human consciousness. We shouldn’t do it to each other. We are not at all built for it. In the fight we stand perhaps, but not on the hopeless mental consequence of war.

The book exudes a kind of resignation. I expected a statement.

No, no resignation, but a sense of reality. And certainly statements are made in the book. What you may taste is the disencouragement and powerlessness after another disaster or war. When the first world war ended many young men had died. Those who survived had long hung out in trenches and experienced bombings around them. They had seen their friends die and more of that misery. How are you supposed to move on in a world that suddenly goes back from murder as usual to business as usual and expects you to drop your weapon and sit in an office chair?

One of my uncles has fought in Indonesia and Korea. Shortly before his death in 2000, he told me that he came back from Indonesia, that they had committed all kinds of atrocities there, but that when he returned home, his mother tried to treat him like the child he was when he left. It made him very aggressive.

What statement do you make then?

The statement that war is absolutely not normal. That it is a time when people are doing the craziest things. That things happen that shouldn’t happen. It’s like a volcanic eruption. Not all of us aren’t built for it and most of us don’t know how to handle it. No one knows who or how he will be in a war. The pressure is enormous, the world around you demands from you that you make black and white choices. You are pro or contra the rulers who dominate your region at that moment. If you don’t agree with what they’re doing and you would express yourself, you risk torture and manslaughter. You have to be very very strong when you are not able to do so.

War is like a hurricane. He can be there in a split second. As we have recently seen in the Ukraine. You only can hope he will pass you by. The statement is of course: please stop this nonsense, it will not be a benefit to anyone. But all of Facebook and Instagram is full of beautiful sayings. It’s easy to score with those spells from behind your desk. It doesn’t prevent us from war, and it doesn’t tell much of the person you would be in wartime.

Bert Overbeek is organization trainer and coach and has written 28 books. pitcher.support@hetnet.nl